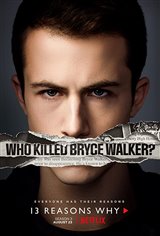 This Netflix original series, based on the bestselling books by Jay Asher, tells the heartwrenching story of a teen's suicide. When Clay Jensen (Dylan Minnette) returns home from school, he finds a box on his porch. Finding his name on it, he opens it to find a cassette tape by Hannah Baker (Katherine Langford), his classmate who committed suicide two weeks earlier.

On the tape, Hannah reveals the 13 reasons that led her to commit suicide. Clay wonders if he is on the list. He will have to listen to the entire tape to find out. Told through the narratives of both Hannah and Clay, this delicate portrayal of teen suicide will take viewers on an emotional journey.

Season two picks up in the aftermath of Hannah's death as the characters work toward healing and recovery as they try to move on. Liberty High school prepares to go on trial. However, someone is trying to keep the truth surrounding Hannah's death concealed. Clay and his classmates receive ominous polaroids that lead to a shocking discovery.

Season three dives into a murder mystery surrounding the death of Bryce Walker.

In the fourth and final season, Clay and his friends keep even more secrets, all while preparing for graduation. The group must deal with the fallout of framing someone for the death of Bryce. They quickly learn their actions have consequences and must figure out how to stop the truth from being exposed.