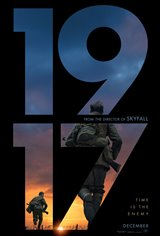 Their superior, General Erinmore (Colin Firth), assigns them a challenging and dangerous task — to personally deliver a letter to Colonel Mackenzie (Benedict Cumberbatch), commander of the 2nd battalion.

In a race against time, they must cross enemy territory and deliver a message that could potentially stop a deadly attack on hundreds of soldiers — one of them being Blake’s own brother.