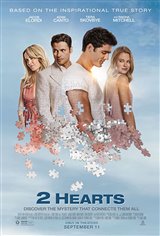 College student Chris (Jacob Elordi) has always lived in the moment, but he’s never really felt like he had a purpose in life. That is, until he accidentally bumps into Sam (Tiera Skovbye) on his way out of a lecture one day and is instantly smitten. Not long after, they meet again and fall instantly in love.

While the two couples are seemingly not connected, fate brings them together when Jorge collapses, due to complications from a disease he’s had since childhood. While playing basketball, Chris suddenly collapses on the court and is rushed to the hospital. After his near-death experience, Chris realizes that everything happens for a reason and that each person has a purpose in life, even if it takes them a while to find out what it could be.

Based on the inspirational true story of Leslie and Jorge Bacardi.