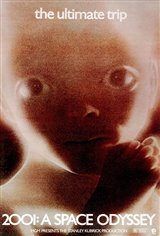 Stanley Kubrick's dazzling, Academy Award-winning achievement (Special Visual Effects) is an allegorical puzzle on the evolution of man and a compelling drama of man vs. machine. Featuring a stunning meld of music and motion, the film was also Oscar nominated for Best Director and Best Screenplay. Kubrick (who co-wrote the screenplay with Arthur C. Clarke) first visits the prehistoric age-ancestry past, then leaps millennia (via one of the most mind-blowing jump cuts ever) into colonized space, and ultimately whisks astronaut Bowman (Keir Dullea) into uncharted space, perhaps even into immortality.