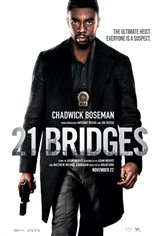 When Andre Davis (Chadwick Boseman) was a small boy, his father, who was a police officer, died in the line of duty. Andre grows up to become an in-demand NYPD detective who specializes in taking down cop killers.

When fellow police officers go to the scene of a robbery involving the theft of 300 kilos of cocaine, all eight are gunned down by two criminals with automatic weapons. Andre is assigned the case and orders the island of Manhattan closed, including all 21 bridges leading in and out of the area, as well as the four tunnels and the three rivers. He has all the trains stopped and the subway is put on a loop.

Meanwhile, as the robbers (Taylor Kitsch, Stephan James) go on the run, they try to make sense of why they were assigned to get their hands on 30 kilos of cocaine, but actually wound up with 300 kilos. They slowly come to realize they've been set up to take a fall, while Andre discovers that there's more to this crime than a simple robbery.