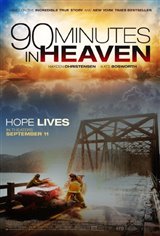 Don Piper (Hayden Christensen), a Texas pastor and loving family man blessed with a beautiful wife (Kate Bosworth) and three children, is involved in a horrific head on crash with a tractor trailer. He's pronounced dead at the scene by first responders. Another minister comes upon the scene and asks to pray for him, but when he pulls back the sheet, he finds Don is still alive.

Don is rushed to the hospital, where his situation is touch and go. In constant pain, he's not sure he wants to survive because while he was clinically dead, he believes he saw Heaven, and it was so glorious, he's torn between living and dying.