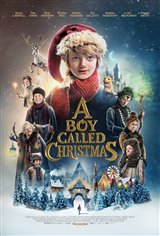 Nikolas (Henry Lawfull), an ordinary boy, is determined to accomplish the king's edict of bringing back a spark of magic and giving the kingdom hope. He embarks on a journey to find a legendary place where elves dwell, known as Elfhelm. On his quest, he's accompanied by his talking pet mouse Miika and an impulsive reindeer called Blitzen. The team heads out to Elfhelm, fully realizing the limitless obstacles and dangers they will encounter along the way, from sleeping giants to icy mountains, witches and more.

However, he discovers that humans are forbidden from entering the magical village of Elfhelm. With help from his friends, Nikolas tries to find a way to bring magic to the rest of the world.

Adapted from the 2015 children's novel by Matt Haig.