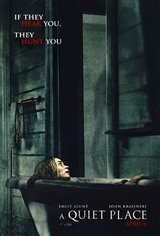 Following the arrival of destructive blind creatures who hunt using only sound, a farm family of four devise a number of methods to live without making any noise.

Lee Abbott (John Krasinski, who also directs) and his wife Evelyn (Emily Blunt) have a deaf teenage daughter, Regan (played by deaf actress Millicent Simmonds), so they already know American sign language and use it, and a lighting system, to communicate in their silent world.

Lee tries to set up a way to communicate with the outside world to find out if there is anyone who can help them out there, or who knows about these creatures so they can figure out how to deal with them and possibly find their weakness. He also tries to make better hearing aids for Regan, who can't hear a thing, despite his earlier efforts.

When Lee takes his son Marcus (Noah Jupe) to learn how to fish so he can help take care of the family in case anything happens to Lee, the boy is terrified to go, fearing that the creatures will find them.

Evelyn, who has discovered she's pregnant for a third time, is happy about the impending birth, but realizes it presents problems, because the family has to devise a way to keep the creatures from discovering their home, even after the baby is born.