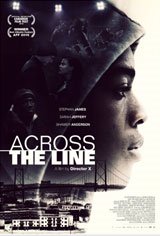 Mattie (Stephan James), is a skilled ice hockey player from North Preston in Nova Scotia. He's tipped to be selected by one of the top teams in the National Hockey League, but his plans are jeopardized by his hustling brother and the corrosive tension at Cole Harbour High School where he's a student, and where racism begins to tear the school apart, leaving a trail of devastation.

Canadian Connection: Filmed in Nova Scotia. The director, writer and most of the cast are Canadian.