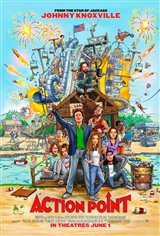 When a young girl is left to spend the day with her grandfather (Johnny Knoxville),  he reminisces about running an amusement park called Action Point, telling her there weren't so many rules back then.

In fact, as the park begins to fall apart and a new amusement park is advertised nearby, it looks like Action Point may have to close. Not willing to give up, he decides to revamp Action Point, offering rides with no rules, no speed limits, no safety precautions, free beer and a petting zoo that offers people the chance to get up close with bears and porcupines.