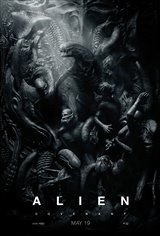 The crew members of the spaceship Covenant travel to a remote planet on the far side of the galaxy on a colonization mission. All of the members are couples, who are risking everything to form a new colony on the planet.

Once landed, they discover what seems to be a paradise, with fields of wheat. But when team leader Daniels (Katherine Waterston) notices the extreme silence of the planet, it's unnerving. There are no birds or animals — in fact, there are no signs of life at all. They discover evidence of an earlier doomed expedition. It soon becomes clear that there is something incredibly dangerous to human life on this otherwise beautiful planet.