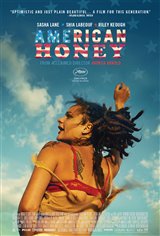 Star (Sasha Lane), a teenage girl from a troubled home in Muskogee, Oklahoma, runs away from home. While foraging for food in supermarket dumpsters in a Walmart parking lot, she meets a travelling sales crew that drives across the American Midwest selling magazine subscriptions door to door.

Star rashly runs away with them, leaving behind her sleazy father and two small half-siblings in the care of their uncaring mother. Finding her feet in this gang of teenagers, Star is initially seduced by the group's lifestyle of hard partying, law-bending and young love. But tensions emerge when Star falls for Jake (Shia LaBeouf), angering the crew's tough boss, Krystal (Riley Keough).