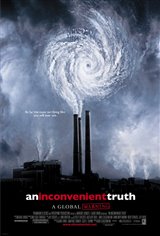 A passionate look at former Vice President Al Gore's fervent crusade to halt global warming's deadly progress in its tracks by exposing the myths and misconceptions that surround it. In the wake of defeat in the 2000 election, Gore re-set the course of his life to focus on a last-ditch, all-out effort to help save the planet from irrevocable change.

In this portrait of Gore and his "traveling global warming show," Gore also proves himself to be one of the most misunderstood characters in modern American public life. Here he is seen as never before in the media -- funny, engaging, open and downright on fire about getting the surprisingly stirring truth about what he calls our "planetary emergency" out to ordinary citizens before it's too late.
Director:
Davis Guggenheim
Studio:
Paramount Classics
Producer(s):
Laurie David, Lawrence Bender, Scott Burns
Cast:
Al Gore
Official Site:
www.climatecrisis.net