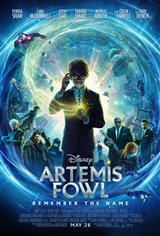 Artemis Fowl II (Ferdia Shaw) is a 12-year-old boy who lives a comfortable, privileged and sequestered life with his father, Artemis Fowl I (Colin Farrell). When his father has to leave on business, he doesn't come back as expected and Artemis sees news reports calling him a criminal mastermind who has been behind some of the world's biggest robberies. However, he soon learns his father is being held for ransom after he gets a mysterious phone call from someone saying he has something of theirs and wants it back.

Artemis' bodyguard, Butler (Nonso Anozie), decides to show him the truth behind what his father does for a living. He reveals that Artemis Fowl II has protected powerful secrets for years that have kept mankind safe from the dangers of another world. Young Artemis is told that it's time to face his destiny.

Along with Butler, Mulch Diggums (Josh Gad) and the elf fairy Holly Short (Lara McDonnell), Artemis goes on a mission to save his father and the world.