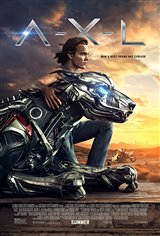 Max (Alex Neustaedter), a down-on-his luck teenage bike rider, stumbles upon an advanced, robotic military dog named A.X.L. After forming a bond, they go on the run together with Max's crush Sara (Becky G) to save A.X.L. from being captured by the rogue military scientists who created him.