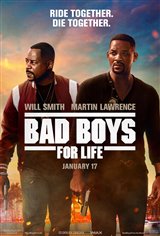 Detective Mike Lowrey (Will Smith) and Detective Marcus Burnett (Martin Lawrence) return for the third and final chapter in the Bad Boys saga. The boys, now middle-aged men, are reevaluating their lives and goals for the future as Marcus finally decides he's had enough and heads into retirement.

Suffering a mid-life crisis, Mike wants to remain a bad boy for life and takes on another perilous case. Paired with a younger, less-relatable team of cops, Mike wants nothing more than his old partner-in-crime back. When it is discovered that a Romanian mobster has put a price on Mike's head, Marcus decides to join him for one last ride.