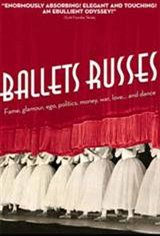 Documentary about the revolutionary 20th-century dance troupe known as the Ballets Russes.

Showing never before seen footage of the troupe from the 1930s through to the 1960s, the film begins with the company's Diaghilev era in turn-of-the-century Paris, when artists such as Nijinsky, Balanchine, Picasso, Mirò, Matisse and Stravinsky united in an unparalleled collaboration.