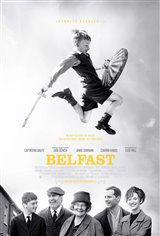 Set in late 1960s Northern Ireland, Buddy (Jude Hill) is a young boy from a working-class family. When a mob enters the street where his family lives, attacking the homes that belong to Catholics, his parents realize their once quiet neighborhood, where everyone is like family, is suddenly changing.

In order to escape the conflict, Buddy’s father (Jamie Dornan) wants them all to move away, but Buddy's mother (Catriona Balfe), doesn't want to go, because both of them have lived in Belfast their entire lives. With an ill grandfather (Ciarán Hinds), and a granny (Judi Dench) who won't leave despite the dangers, Buddy struggles to understand what's best for the family, as what they all want at the end of the day is to live peaceful lives.