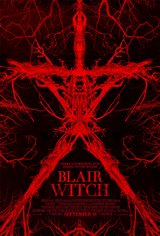 Two decades after the events of The Blair Witch Project, a college student named James (James Allen McCune) comes across a video on the Internet that was shot in the haunted Black Hills forest in Maryland. He believes one of the people in the video is his missing sister Heather, who disappeared with her camera crew while investigating the legend of the Blair Witch. He and his filmmaker girlfriend Lisa (Callie Hernandez), along with friends Peter (Brandon Scott) and Ashley (Corbin Reid), head for the woods to search for Heather.

As Lisa documents their journey, they are joined by Lane (Wes Robinson) and Talia (Valorie Curry), the odd pair who posted the original footage to YouTube and now act as the group's guides. However, it doesn't take long before the group begins to encounter events that are eerily similar to those that Heather and her film crew had previously encountered. James follows an ominous figure he thinks is his sister to a house in the woods, but his girlfriend doesn't think that it's his sister at all.