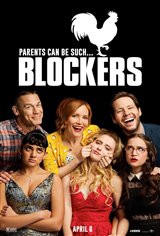 Lisa (Leslie Mann), Mitchell (John Cena) and Hunter (Ike Barinholtz) have been friends ever since they met on the first day of school for each of their daughters.

Ten years later, their daughters — Julie (Kathryn Newton), Kayla (Geraldine Viswanathan) and Sam (Gideon Adlon) — are best friends in their senior year of high school, while the parents have drifted apart. During an online chat with Kayla and Sam, Julie announces she wants to lose her virginity to her boyfriend on prom night.

Kayla decides she'll follow suit, while Sam, who's gay, decides to go along, in an effort to see if she's sure about her sexuality. When the parents find out about their daughters' pact, they launch a covert one-night operation to stop the teens from sealing the deal.