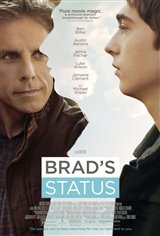 Brad Sloan (Ben Stiller) has a beautiful home in Sacramento, the career he'd wanted from the time he was a college student, a wife (Jenna Fischer) and son who love him, but he's still unsatisfied with his life.

While having dinner with friends, he spots a copy of Architectural Digest that features an old college buddy and his magnificent mansion on the cover. Brad begins to think of his group of friends from college, all of whom are now successful and wealthy. He begins to feel like a failure.

During this crisis of confidence, Brad goes on a trip to Boston with his college-bound son Troy (Austin Abrams). He hovers between feeling good about his son's bright future, and being unhappy about his own choices in life.