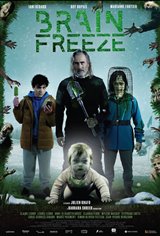 As winter approaches, the owner of an exclusive island golf club spreads bioengineered fertilizer on his courses to melt snow in order to be able to keep the club open during the cold weather. His act is not without consequence. The water from the municipal aqueduct gets contaminated by the product, turning citizens into green zombies thirsty for blood.

André (Iani Bédard), a resourceful teenager addicted to soft drinks, and his little sister, who only drinks from bottles that contain spring water, escape contamination. After neutralizing their mother, poisoned by her vegetable juices, they run away from the house. The brother and sister cross paths with a security guard (Roy Dupuis), whose daughter has also been transformed into a zombie. The gruff man in his fifties takes the children under his wing, although he proves to be a poor survivalist.