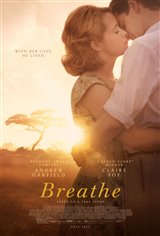 Robin Cavendish (Andrew Garfield) spots a beautiful young woman named Diana (Claire Foy) at a cricket match and even though his friends tell him he doesn't stand a chance, they fall in love and get married.

In 1959, the Cavendishes are in Kenya with their first child on the way when Robin is struck down by polio. The doctors say he's paralyzed and only has a few months to live. They return to Britain, where Robin is confined to a  hospital bed day in and day out, staying alive only thanks to a ventilator that keeps him breathing.

Although Robin would rather die than lie in a hospital bed for the rest of his life, Diana refuses to listen, saying their son needs his father. In order to bring back Robin's will to live, Diana has to figure out how to get him out of the hospital and home, where she plans to care for him herself.