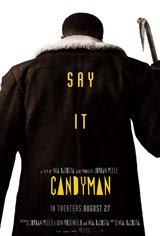 This film is a "spiritual sequel" to the 1992 horror film Candyman. Anthony McCoy (Yahya Abdul-Mateen II) and his girlfriend move into a loft in present-day Chicago, where Anthony meets an old-timer who has lived in the neighborhood for years. The man tells Anthony the truth about Candyman, an urban legend that forewarns of a man in the mirror who will kill you if you say his name five times.

According to the old man, Candyman is also more than one person — it seems as though he can exist in different bodies. When a group of girls are slayed after saying his name five times, Anthony goes on the hunt for Candyman, taking photos around his new neighborhood. Soon, he becomes obsessed with the legend. But what he finds is far more sinister than he expected and it brings waves of violence and murder to the community.