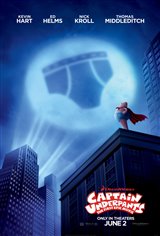 Adapted from the popular children's novel series by Dav Pilkey.