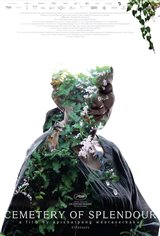 During an excavation project, a group of soldiers are seized by an unknown illness and fall into a deep sleep. They're tended to at a rural hospital, where a local named Jen volunteers to help care for them. She becomes attached to one of the soldiers - a handsome young man named Itt. Meanwhile, a medium is helping family members by probing the minds of the comatose men.

With the information gathered and a look at Itt's notebook, which contains strange writing and sketches, it begins to appear that what has happened to the soldiers may be related to the ancient archaeological site underneath the clinic.