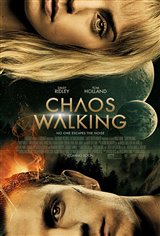 In a dystopian colony on a planet called New World, Todd Hewitt (Tom Holland) has grown up believing a virus has killed all women and given all living creatures the ability to read each other’s minds and hear each other's thoughts in a stream of images, words and sounds called "the Noise. "

When he discovers an area that is completely silent, he happens upon a young girl, Viola Eade (Daisy Ridley).

Based on the novel The Knife of Never Letting Go by Patrick Ness.

Filmed in the province of Quebec. Several actors in supporting roles are Canadian.