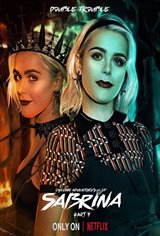 As Sabrina's (Kiernan Shipka) 16th birthday approaches, Sabrina, whose father was a warlock, but whose mother was a mortal, is forced by her aunts to choose whether she wants to be a full witch or a full mortal, with none of the powers she's enjoyed to date.

The girl has a difficult time deciding, because becoming a full witch would mean giving herself over to Satan, going to a different school and never seeing her friends again, and worst of all, giving up her sweet and wonderful boyfriend, Harvey (Ross Lynch). As her birthday approaches, Sabrina struggles to come to a decision.

In season two, Sabrina is now a full-time student at the Academy of Unseen Art and Ms. Wardwell is Baxter High’s principal. Sabrina competes in the top boy competition and goes face to face with Nicholas Scratch (Gavin Leatherwood), while the town of Greendale faces the Dark Lord's prophecy.

In season three, the Church of Night and the satanic world has been affected by the events in the season 2 finale. The Spellmans step in to help rebuild the church. After being set up Father Blackwood for the murder of the Anti-Pope, Ambrose Spellman teams up with Prudence Blackwood to hunt him down. The demon Caliban and Sabrina are sent on a task as they compete with each other. Sabrina realizes she has to make a choice between having immense power and a normal life with her friends and family.