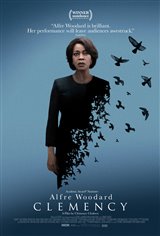 Prison warden Bernadine Williams (Alfre Woodard) has been in charge during eleven death row executions, and the stress of carrying them out has taken a great toll on her emotional and physical health.

As the execution date for another inmate approaches, Bernadine gets to know him. Anthony Woods (Aldis Hodge) is a young African-American man who was convicted of shooting a police officer during a convenience store robbery 15 years earlier. He's a silent man, keeping to himself. He only opens up somewhat during visits from his lawyer, who continues to main Anthony's innocence.

Her interactions with Anthony show a quiet, gentle man. But Bernadine can't listen to her emotions if she's to remain the warden.