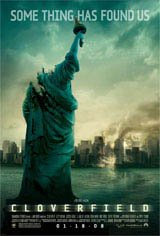 On the eve of his departure for Japan, Rob (Michael Stahl-David) sees his going-away party as an opportunity to confess unresolved feelings and tie up loose ends. His agenda takes an unexpected turn when a jolt shakes the revelers. The crowd quiets down to watch news reports of an earthquake, then rushes to the roof to assess the damage. A fireball explodes on the distant horizon. A power failure follows. Confusion gives way to panic as the partygoers stumble through the blackout and into the streets.