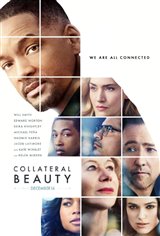 Howard Inlet (Will Smith) is a brilliant, creative advertising executive in New York City with partners (Edward Norton, Kate Winslet, Michael Peña) who are also his best friends. After the tragic death of his young daughter, he becomes a shattered version of his former self. He withdraws from the world, leaving his friends struggling to run the company. In an effort to cope with his overwhelming grief, he writes letters to Time, Love and Death.

Meanwhile, his friends are getting worried about the company and hire a private detective to follow Howard, who is visited by Time, Love and Death (Jacob Latimore, Keira Knightley, Helen Mirren). What the colleagues don't realize is that the burdens that each of them is coping with in their own lives will come into play, as Howard ultimately learns that even the deepest losses can lead to moments of beauty and meaning.