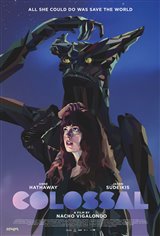 After losing her job and boyfriend in New York, Gloria (Anne Hathaway) finds herself broke, jobless and recently single. She moves back to her home town to find a huge monster attacking Earth.

Strangely, she finds the monster has the same nervous tick Gloria has, of scratching her head. She starts to realize her emotional state has a connection to the beast, and finds she can control its actions. Gloria has to find a way to end the monster's destruction and save Earth.