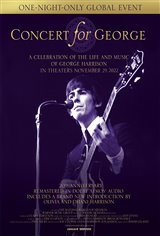 On the 29th of November 2002, one year to the day that George Harrison passed away, his closest friends gathered to celebrate his life--in the only way they know how, by playing his music. This historic event was captured on film. The first half provides insight into George's spiritual self, as Anoushka Shankar and a sixteen-piece orchestra of Indian musicians performed a special composition by her father--and George's mentor--Ravi Shankar. The second half gave the audience a rare sighting of members of the Monty Python team performing some of George's favorite skits. This was a tribute to George's well-known sense of humor. The rest moved to on to legendary musicians, Eric Clapton and his friends, giving the performances of their lives--singing George's well-loved songs. The list of musicians includes many with whom George worked with over the years: Joe Brown, Jools Holland, Sam Brown, Jeff Lynne, Paul McCartney, Tom Petty and the Heart Breakers, Ringo Starr and Billy Preston. As performers, they all gathered for one of the most beloved men of their generation.