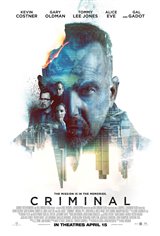 Jericho Stewart (Kevin Costner), a sociopathic convict who has been in and out of prison more than half his life has the memories and skills of a deceased CIA agent, Bill Pope (Ryan Reynolds), implanted into his brain. Pope was killed after delivering a Dutch programmer, Jan Stroop (Michael Pitt), to a safe house for protection.

The CIA does the transplant in the hopes that Jericho will remember where Pope placed Stroop, but the convict says he remembers nothing. With the intel lodged in his skull, Jericho becomes the target of a terrorist organization. When they try to kill him, he escapes and uses the knowledge and skills he now possesses to go to Pope's wife Jill (Gal Gadot) to get information on what the agent was doing and why he was killed. Once there, he begins to feel compassion for the first time and sets out to finish Pope's mission.