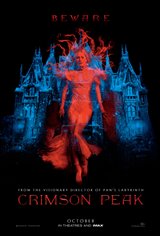 Unimpressed with Sharpe's prototype, Edith's father not only turns him down but he puts a stop to Thomas and Edith having a relationship. When he's mysteriously murdered, Edith and Thomas marry and travel to England to live at Allerdale Hall, Thomas' rundown mansion where he lives with his sister, Lucille (Jessica Chastain).

However, shortly after arriving in England, Edith is confused when Thomas is cold and distant towards her. Edith begins to explore the mansion and discovers clues that lead her to question her new husband's intentions.

Canadian Connection: Filmed in Toronto, Hamilton and Kingston. Some cast members are Canadian.