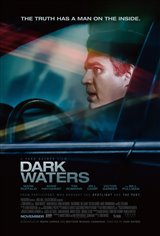 Big city corporate defense attorney Rob Bilott (Mark Ruffalo), who defends chemical companies such as Dupont, is contacted by Wilbur Tennant (Bill Camp), a West Virginia farmer who has lost 190 cows. He insists their deaths are due to Dupont dumping chemicals into Dry Run Creek, which they used as drinking water. Bilott knows Tennant's family because he used to visit his farm to ride horses when he was a boy, so he decides to take a trip to West Virginia to see firsthand what Tennant is talking about.

Appalled when he sees the graphic evidence on the farm, Bilott agrees to represent Tennant. However, that pits him against one of his firm's biggest clients. He also wonders if the poisoned water killed so many cows, what is it doing to the people who live there? When he investigates, he discovers Dupont has been dumping chemicals into the water and knowingly poisoning local residents for the last 40 years. When Bilott tries to expose the truth, his colleagues turn against him and he discovers his future, his family and his own life are being threatened.

Inspired by a true story.