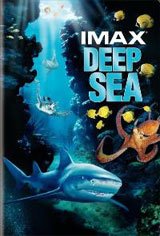 "Sea" life in a whole new way. This new and enthralling undersea adventure, offers audiences astonishing up-close encounters with some of the most strange and exotic creatures on the planet, from the bizarre rainbow nudibranch to the giant Pacific octopus.

Through IMAX and IMAX 3D technology, moviegoers will swim with some of the planet's most unique, dangerous and colorful creatures and come to understand this inspiring underworld. Every animal here is dependent on another for survival, so the cooperation that exists among these ocean dwellers is the key to a flourishing neighborhood.