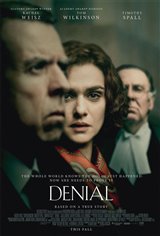 In 1996, Brit David Irving (Timothy Spall) sued American historian Deborah Lipstadt (Rachel Weisz), as well as Penguin Books, which published her book Denying the Holocaust, because she criticized some of his anti-Semitic writings and public statements, in which he claimed to be able to prove there had been no gas chambers at Auschwitz.

With the suit having been filed in Britain, Lipstadt worries because English libel law puts the burden of proof on the defendant rather than the plaintiff, so if she is not able to prove the veracity of the existence of gas chambers for the purpose of killing Jews and other prisoners at Auschwitz, it will become widely acceptable for hatemongers to claim the Holocaust didn't happen.