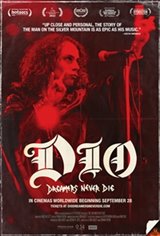 Beautifully highlighting both his powerful voiceand his gentle heart, "DIO: Dreamers Never Die" delves deep into the singer's incredible rise from '50s doo-wop crooner to his early rock days in Elf and Ritchie Blackmore's Rainbow, to replacing Ozzy Osbourne in Black Sabbath, and finally cementing his rockstar status with his own band, DIO. The first documentary to be authorized by the artist's estate brings viewers inside the life of one of the most beloved figures in rock.