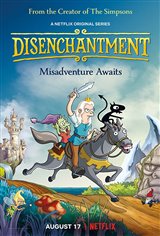 From the creator of The Simpsons, Disenchantment takes place in the crumbling medieval kingdom of Dreamland, where we follow the misadventures of the oddball trio of hard-drinking young princess Bean (voice of Abbi Jacobson), her feisty elf companion Elfo (Nat Faxon), and her personal demon, Luci (Eric André).

In Part 2, Bean travels with Dagmar to her homeland, Maru, where she rescues an old friend and learns of a mysterious prophecy she's expected to fulfill.

In Part 3, Bean must step up her princess game amid royal plots, deepening mysteries, King Zøg's (voice of John DiMaggio) increasing instability and concerns about who will rule Dreamland.