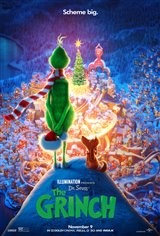 The Grinch (voice of Benedict Cumberbatch) is a cynical grump who likes to bring misery to people's lives. He routinely goes into Whoville to do mean things, spreading ill will wherever he goes.