Dr. Strangelove, Or How I Learned to Stop Worrying and Love the Bomb 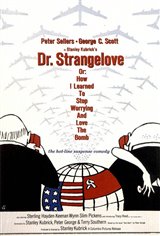 A look at the potential problems of nuclear warfare, Dr. Strangelove is an all-out comedic assault on the cold-war era military industrial complex.

Peter Sellers goes insane in three classic performances, as a British exchange officer, the American President, and the titular German scientist, all of whom are tying to avoid Armageddon after an American General goes mad and orders a nuclear attack on Russia. Satire at it's finest.