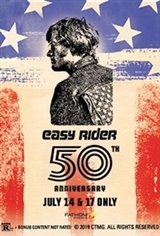 In the role that catapulted him to stardom, Jack Nicholson portrays an alcoholic attorney who hooks up with two part-time, drug-dealing motorcyclists (Peter Fonda and Dennis Hopper) in search of their "American Dream." Nominated for an Academy Award(s) (1969) for Best Screenplay (written by Peter Fonda, Dennis Hopper and Terry Southern), Easy Rider continues to touch a chord with audiences everywhere.