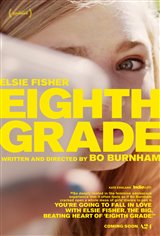 Kayla (Elsie Fisher) has an online blog in which she tries to help other kids like herself navigate the social ins and outs of being a teen. She advises other kids to face their fears and let other people know the "real you."

However, that's easier said than done, even for Kayla, who is mortified when she's labeled the "most quiet" of her eighth grade class. She considers herself funny, cool and talkative, although she admits she doesn't talk a lot at school. While trying to bond with other girls, she finds their attention is so far into their cell phones that they don't even hear her.

She has a great dad, but she finds him embarrassing, so she limits communication with him, hoping instead to be accepted by the kids at school. Even though eighth grade can be hard, she looks forward to next year, when she'll be starting high school.
Director:
Bo Burnham
Studio:
Elevation Pictures
Producer(s):
Christopher Storer, Eli Bush, Lila Yacoub, Scott Rudin
Cast:
Elsie Fisher, Josh Hamilton
Writer(s):
Bo Burnham
Official Site:
eighthgrade.movie