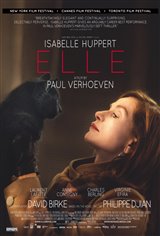 When successful businesswoman Michele Leblanc (Isabelle Huppert) opens the sliding door of her home to let her cat in, a masked man, clad all in black, forces his way in and violently rapes her. At first in denial, she tries to hide the assault from others. When she's asked where a bruise on her face came from, she claims she had a bicycle accident. When she finally tells her friends what happened, it becomes clear she didn't report the crime to the police.

However, the assault left her with emotional scars. She has all the locks changed on her house, learns how to handle a gun and has one of her employees hack into the staff's personal computers. As it turns out, Michele is the daughter of a notorious serial killer who was convicted and imprisoned for his crimes. When Michele finds out the identity of her attacker, she begins to stalk him, determined to get revenge.

Based on the novel Oh... by Philippe Djian.