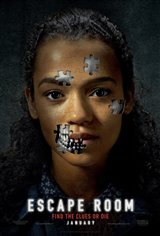 College student Zoey (Taylor Russell) is advised to "try doing one thing that scares you" during a break from school. When she receives a black box anonymously through the mail, with a card that invites her to win a million dollars by being "the first to escape the most immersive room yet,” she reluctantly goes to the address on the card.

When she gets there, she finds five other people, all of whom also received a cube with directions. The room where they meet turns out to be the escape room, which quickly heats to over 400 Fahrenheit. They must use their wits to find the clues and escape.

As they enter room after room, they discover that the game is real and they're in danger of being killed if they don't think quickly. They also discover why each of them was chosen.

Actors Taylor Russell and Tyler Labine were born and raised in Canada.