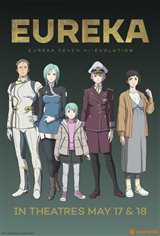 The virtual world inside the scab coral (intelligent coral-like lifeforms) created by Eureka... The people from that virtual world appeared on Earth ten years ago when it collapsed. Since this large-scale amalgamation, the humans from the virtual world, "Green Earth" and the original Earth humans, "Blue Earth," are often in conflict. Eventually, Dewey Novak, a senior officer in the Green Earth Armed Forces, and his associates sets a large-scale terrorism plan into action. Meanwhile, Eureka, who is detested by the world as the main cause of the chaos, has become a high-grade combatant with the UN's A.C.I.D. unit. Live in order to keep this world at peace - this was the path of atonement she chose. One day, she receives an order to protect a girl named Iris, a new "Eureka" who has the ability to control scab coral. Soon the world faces a crisis, and when that happens, Eureka draws on every last ounce of her strength as she fights.