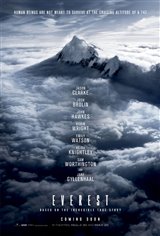 Two different expeditions go on a mission to climb Mount Everest, the world's highest mountain. Due to the amount of people attempting the climb at once and the lack of fixed ropes placed at strategic points in advance, the climbers first find themselves in a bottleneck, delaying their journey.

On the way up, they are pushed to their limits, facing treacherous snowstorms, dwindling oxygen tanks and harrowing elements.

Based on the real events of the 1996 Mount Everest disaster.