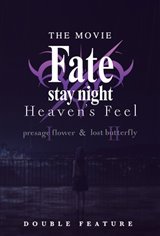 Return to Fuyuki City, as Shirou Emiya and Sakura Matou's peaceful lives are torn apart by the Holy Grail War, an epic battle where Masters and Servants fight to claim the Holy Grail. Brought to life by Director Tomonori Sudo and featuring music by renowned composer Yuki Kajiura, both films are masterfully animated by the revered studio ufotable, weaving an emotional and tragic tale along with breathtaking Servant battles that should not be missed on the big screen!