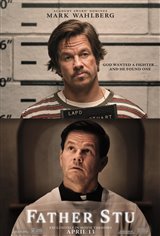 God needed a fighter, and He found one in Stu (Mark Wahlberg). Long, who was a boxer, moves to Los Angeles to start a career in acting when boxing doesn't pan out. There, he falls for a Catholic woman and is baptized.

After a near-fatal motorcycle accident left him in the hospital, Long decides he was saved by God for a reason. He turns to religion and eventually joins Oregon's Mount Angel Seminary, where he becomes very popular with the people to whom he preaches. But when he's diagnosed with a progressive muscle disease, it may interfere with his duties as a priest.

Based on the true-life story of boxer-turned-priest, Father Stuart Long, whose journey from self-destruction to redemption inspired countless people along the way.